The following article is adapted from a talk on dementia by Dr Prof Aaron Ang. He is currently the Adjunct Associate Professor at NUS-YLL School of Medicine and LKC-NTU School of Medicine, and a Senior Consultant Psychiatrist in the Department of Psychological Medicine, Tan Tock Seng Hospital. Dr Ang’s clinical interests include the Psychiatry of Old Age, Mental Capacity Assessment, and the Psychiatry-Medicine interface. As a Psychiatrist and a former HOD, he believes in holistic care, as well as the need for collaboration at intra- and interdepartmental levels.

We will be covering why dementia can be seen as a brain failure, the challenges in finding a cure for this disease, why it is important to be able to recognise its early signs and symptoms, and how to get diagnosed and treated for dementia.

1. Dementia can be Thought of as a Brain Failure

When the vital organs such as the heart, liver or kidneys fail to function optimally, doctors recognise the symptoms and are quick to diagnose them as “heart failure”, “liver failure” or “renal failure”. Similarly, dementia can be thought of as a brain failure. The loss of brain function, however, is often profoundly more debilitating.

Firstly, one’s mind is inextricably linked to the self and one’s identity. As such, failure of brain function can lead to the loss of self and identity changes. People with dementia may act differently, become depressed or withdrawn, and over time, lose the ability to manage their most basic activities of daily life. This has a massive psychological impact on the patient as well as their family and caregiver.

Secondly, there remain challenges in finding an effective dementia treatment, as we will discuss later in this article. Available medications aim to manage dementia symptoms and slow down the progress of the disease. But there is yet a solution to reverse the loss of cognitive functions. Brain failure in the case of dementia is progressive and permanent. Until a cure is found, early detection offers another avenue to fight dementia.

2. Dementia Affects 10% of the 60+ Population in Singapore, More Women than Men

A robust local population study in 2015 done by IMH researchers found that the prevalence of dementia in Singapore is about 10% among those aged 60 years and older. The chances of dementia increase exponentially with age and double every 5 years after the age of 65. As the population ages, the number of people with dementia in Singapore is expected to increase, estimated to be 187,000 by 2050. Though old age is the most common risk factor of dementia, other factors can contribute to triggering the condition, such as genetics, obesity, diabetes, high cholesterol and other medical conditions.

Worldwide, more women are affected by dementia than men, especially after the age of 80. Moreover, they tend to develop more severe symptoms of dementia than men. One of the reasons is that women live longer than men. The role of gender in dementia is a topic of interest to researchers, as it can potentially help to uncover different ways to lower the risk of developing dementia and managing the condition in each gender. 3. Finding a Cure for Dementia

In a well-run factory, there is sufficient spare capacity such that the factory can maintain production regardless of transient fluctuation in the productivity of individual workers. For instance, if some workers retire or quit their jobs, production is not affected. This is what happens with a normal ageing brain. Despite ageing-related cell loss, adequate reserves are available to maintain production.

However, if the factory is not running well, and starts laying off its workers through retrenchment after retrenchment, its reserve gets overwhelmed. Very soon the production cannot be maintained. In a similar manner, the brain affected by dementia loses its workers so fast that it cannot continue normal efficient functioning. This comparison explains the phenomenon of a shrinking brain and how cognitive functioning is affected.

In this light, finding a cure for dementia involves a two-prong approach: 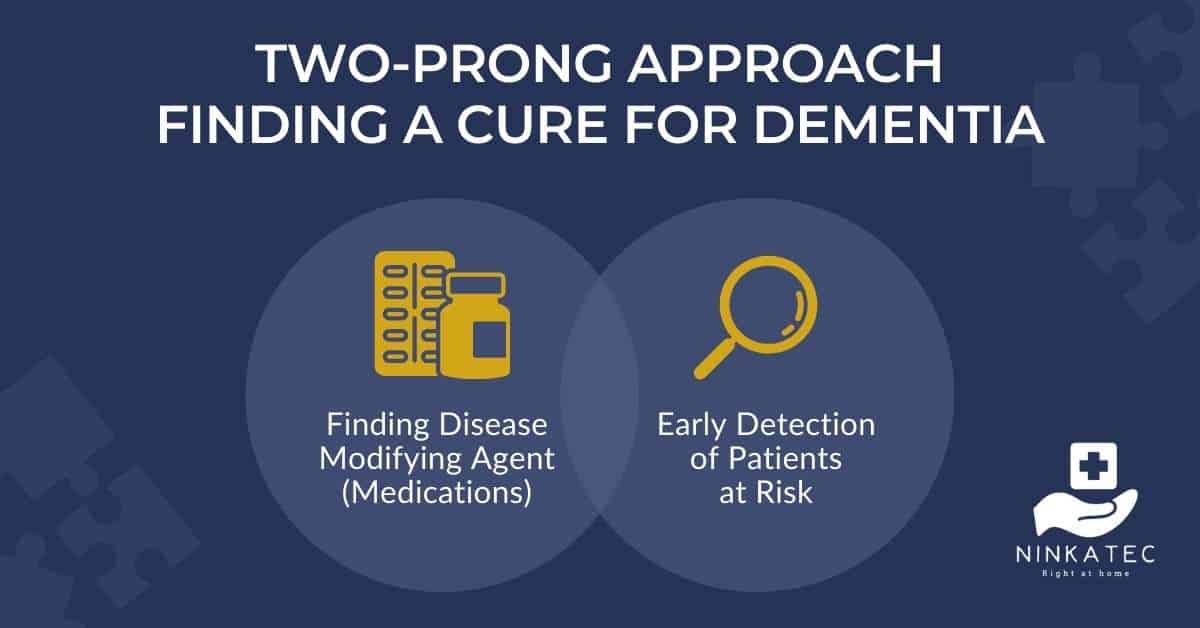 4. Why is it Challenging to Find a Cure for Dementia?

Now that we have a clear approach to treating dementia, what stands between us and a cure?

Firstly, it is not a disease with only one cause. There are many possible causes of dementia, such as Alzheimer’s disease, Parkinson’s disease, stroke, vascular diseases (more about these causes in our article here). Thus, development of multiple effective treatments is required. However, our biomedical system is designed to develop and test one drug at a time.

As far as diagnosis is concerned, there are challenges to accurately diagnose dementia. The crucial requirement for the development of therapies is an accurate diagnosis. Only when we identify with confidence and precision who has and who does not have the disease can we begin the development of the effective drug.

5. How to Spot the Early Signs and Symptoms of Dementia?

Let us now discuss the second prong of the above approach to treat dementia – early detection of the disease. The challenge is that the early signs of dementia are often not obvious. The patients themselves, family members and caregivers often fail to recognise these symptoms as they mistakenly assume that these changes are a part of the normal ageing process. Thus, these symptoms may go unnoticed for a long time.

To aid with identifying dementia early, it is crucial to be able to distinguish between normal age-related and dementia-related behaviours. Below are the common signs and symptoms of dementia, with comparison to similar behaviours in a normal ageing individual where possible:

It is important to visit a doctor when you notice these signs and symptoms in yourself or your loved ones for professional evaluation.

6. How is Dementia Diagnosed

Diagnosis of dementia for someone with dementia symptoms involves a series of steps. There is no single test that can confirm or disconfirm the disease.

The first step is to rule out other medical causes

There are many conditions that have symptoms similar to dementia. If you notice the above symptoms in yourself or loved ones, do not immediately assume dementia. Endocrine disorders such as thyroid disease, autoimmune conditions, infections, neurological conditions and others all cause dementia-like symptoms and these conditions can be treated. Psychiatric conditions such as depression can also mimic dementia in symptoms exhibited.

Once the doctors have identified a number of possible causes, an investigation is carried out to check for possible illnesses responsible for the symptoms. Possible tests include:

Although patients are often not required to go through all the above steps, as you can see, dementia diagnosis can be a complex, time-consuming and costly process. The good news is, in many cases, the cause is not dementia and the condition is treatable. 7. An Effective Dementia Treatment: Are We There Yet?

In the context of Singapore and Asia, conducting and participation in research is important for us to understand dementia among Asians. Our current knowledge of the disease is mostly derived from studies on non-Asian populations. We are yet to know if there are differences on the biological level that would make treatment of dementia in Asians different, and therefore more effective.

Coming back to the analogy of the brain as a factory above, today’s treatment of dementia can be understood as a ‘workaround’ to help the factory maintain its production. Eventually, even with the presence of highly productive workers, the factory will one day be overwhelmed. But it is our hope that before long, there will be an effective cure to truly restore the factory’s production to its viable level.

8. The Role of Family Physician

You may ask, which doctor should I go to if I see signs of dementia, a psychiatrist, a family doctor or someone else? Our general advice is to visit your family GP first as  dementia-like symptoms can be caused by other medical conditions rather than dementia.

Family doctors often know what other conditions or comorbidities the patient has and understand the family and their social background. As for dementia care, they can conduct the initial examination and then refer the patient to a specialist for diagnosis and ongoing management of dementia.

As the first line of defence in patient care, family physicians play a special role through the course of this illness. They can:

When dementia advances to the late stages, a patient would typically require:

Find out how palliative care can benefit dementia patients and their family here, and how to initiate the conversation on Advance Care Planning with your loved ones here.

From developing a vaccine for Alzheimer’s disease, to gene therapy that aims to inhibit the production of amyloid protein, scientists all over the world are hard at work to find an effective treatment for dementia. While waiting for the good news on that front, we can play our part by raising awareness of the signs and symptoms of dementia, helping with early detection of the disease. Though not yet a silver bullet, by catching these early signs of dementia, with the help of family doctors, psychiatrists and other specialists, together we can push back the decline of the ‘brain factory’ for this debilitating condition. 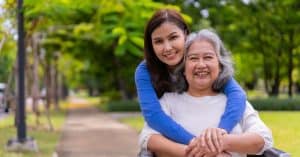 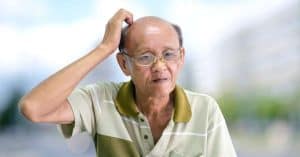 Common Eye Problems among the Elderly

Common Hearing Problems among the Elderly