Two in three seniors over the age of 65 have 2 or more chronic diseases. This is known as comorbidity. Elderlies with dementia are no exceptions. In fact, experts believe that individuals with dementia are at a greater risk for certain health conditions as compared to those without dementia. These commonly include high blood pressure, stroke, cardiovascular diseases, diabetes, mental health conditions like depression and Parkinson’s disease.

These comorbidities are often a challenge for the primary and secondary care of the patients, as we discussed in the article on chronic disease management among the elderly. They have the potential to make the patient’s overall health status worse than individuals who are diagnosed with dementia alone. An example is the increased cognitive decline in patients with diabetes mellitus type 2. Furthermore, having dementia with comorbidities can complicate the treatment of dementia. The patient with dementia may not be able to self-manage their conditions, and it may also be trickier for the caregivers to manage them.

On the other hand, these comorbidities may also be targeted to prevent the onset of dementia in the first place due to the close association between them. In this article, we discuss the 5 common comorbidities amongst dementia patients. The knowledge can help caregivers and families take more proactive care for their loved ones with dementia. Individuals with risk factors can also take steps to mitigate the risk of dementia and comorbidities.

1. Causes of Comorbidities in Dementia Patients

Age is a common risk factor of dementia and many other diseases. In Singapore, about 1 in 10 adults aged 60 years and above has dementia, while 1 in 3 has diabetes and nearly 3 in 4 has hypertension. It is no surprise that a person can develop at least 2 chronic conditions including dementia in their senior years.

The most common types of comorbidities that are seen along dementia in the elderly population include Parkinson’s Diseases, Hypertension,Diabetes Osteoporosis, Chronic Ulcers of the skin, Thyroid diseases, Anxiety, Depression, Neurosis, Cardiovascular disorders, Anemia, Hypertrophy of the Prostate in males, and Retinal diseases.

Certain medications prescribed for dementia may have an adverse effect on the patient. The drugs commonly given to dementia patients can be divided into three categories:

Long term usage of the group of drugs to regulate mood has been found to significantly increase the risk of dementia. Among dementia patients, studies indicate that patients taking anxiolytics and antipsychotic medications over the long term may have a faster decline of cognition. Thus, it is important to control medication usage duration and report to your doctor any signs of dementia worsening in your elderly loved ones.

Direct or Indirect Complications from an Existing Condition

Certain chronic conditions may increase the risk of dementia. Similarly, having dementia may trigger another medical issue that was not there before or trigger an existing chronic condition to flare up. For instance, one in ten stroke survivors is estimated to be at risk of developing dementia within one year after the stroke. On the other hand, someone with dementia may become less active and less stringent with monitoring  their blood pressure, worsening their cardiovascular health and increasing the chance of a stroke.

2. Conditions that are Associated with Dementia

The exact mechanism of how different chronic diseases can affect dementia is still being studied. At the moment, scientists have identified certain causes and risk factors. For instance, many patients with Parkinson’s diseases develop a type of dementia called Parkinson Disease Dementia. Another type of dementia known as vascular dementia usually occurs in patients with a history of stroke or vascular disease.

In the following part of the article, we will look at the 5 most prevalent chronic diseases among dementia patients in Singapore. They include:

Moreover, individuals with dementia and Parkinson’s disease are more likely to have functional limitations that may predispose them to accidents like falls. Those with additional comorbidity of osteoporosis are at a greater risk for fractures, falls, lack of mobility and even disability.

Up to three quarters of Singaporeans aged 60 and above have hypertension. This chronic condition has been found to increase the risk of cognitive decline, Alzheimer’s disease and other forms of dementia. Researchers believe one of the reasons is that those with high blood pressure may have a higher risk for small vessel diseases, which can cause vascular dementia.

The good news is that controlling blood pressure can provide protection against dementia. The blood pressure may be controlled by adopting a healthy lifestyle or taking antihypertensive medications like calcium channel blockers and renin-angiotensin-aldosterone blockers, as prescribed by the doctor. Read our article on managing hypertension and avoiding complications at home here.

Stroke and cardiovascular diseases are the main causes of vascular dementia. This can be a series of mini-stroke (TIA) or a major stroke (More about mini-stroke and strokes in our article here). One study shows that individuals with stroke are at double the risk of developing dementia. In addition to stroke, the most common cardiovascular conditions observed in dementia patients include Coronary Artery Diseases, Atrial Fibrillation, Ischemic heart disease. However, not everyone with a stroke or cardiovascular condition will develop dementia.

Dementia and depression have an intricate relationship in the elderly population. We know that people with depression or on long term antidepressant drugs have an elevated risk for developing dementia later in life. In some cases, depression-like symptoms such as social withdrawal or bad temper may in fact be the signs of dementia. In other cases, a person may suffer from both conditions and needs treatment for both at the same time.

According to statistics, approximately 30-40% of dementia patients have depression. Treatment for these individuals often involves combining pharmaceutical and non-pharmaceutical approaches. Therapists, caregivers, families, friends and community play a crucial role in helping the patients overcome depressive episodes and improve their quality of life.

1 in 3 Singaporeans is expected to develop diabetes in their lifetime. As elevated blood sugar level over time can affect the cardiovascular and neural systems, diabetes can lead to dementia. Researchers have found that people with diabetes show signs of brain dysfunction from early stages, which can accelerate into cognitive decline later on.

The connection between diabetes and dementia can be used to prevent the occurrence of dementia. This is particularly important for patients who are in the pre-dementia stages. By keeping blood glucose levels in check, they can prevent many complications associated with diabetes including dementia. Find out more about other complications from diabetes and how you can prevent them here.

Dementia patients with diabetes need to manage their diabetes to prevent dementia worsening quickly and other complications. Reducing sugar intake is another top nutrition tip for all dementia patients, with and without a diagnosis of diabetes.

Comorbidities are prevalent among people with dementia. As such, dementia care requires a holistic approach, with close attention paid to other conditions that can potentially worsen or complicate dementia. Apart from hypertension, stroke, cardiovascular disease, Parkinson’s disease, depression and diabetes as discussed above, consult your doctor about conditions like thyroid dysfunction or osteoporosis. Beware of the risks of skin ulcers or fractures and falls that may happen due to reduced mobility among elderlies with dementia.  Make home safe for them to move around by ensuring the house is well-lit, installing grab bars, anti-slip floor treatment, etc. Seniors living in HDB can tap in EASE subsidy program for these home improvements – check out the eligibility conditions here .

If you have one of the conditions that are commonly seen in dementia patients listed above, early treatment and care may offer a chance to protect you against the debilitating development of dementia down the road. This includes regular health checks, lifestyle modifications, dietary alterations, and following drug therapies as prescribed by your doctor. If you have a family history of dementia or other dementia risk factors, it may be worthwhile to go for dementia screening.

Learn more about Ninkatec’s intensive home care services for dementia here or get in touch below with us to learn more. Acute Symptoms in Elderlies: What to Do at Home and When to Call a Doctor 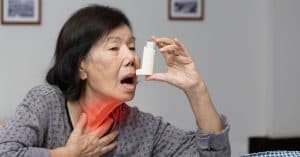 Acute Symptoms in Chronic Lung Disease: Knowing When to Call for a Doctor