The following dementia-related questions are collected from the live Q&A session at a dementia talk organised by Ninkatec in July 2022. Read on to have your burning questions on dementia answered by Psychiatrist Dr Aaron Ang, Nuclear Physician Dr Andrew Tan, and Ninkatec Co-founder Dr Choo Wei Chieh.

For a full record of the dementia talk, head to our YouTube channel to watch the replays. Follow our Facebook page to be updated on the next talk by our dementia experts.

1. Does memory loss in dementia affect short term or long term memory, or both?

Dementia typically affects short term memory first. Short term memory loss manifests as forgetting recent events and information. For instance, people with dementia may repeat their questions, because they cannot recall what was said. Or they may not have a clue what they did last week. As the disease advances, long term memory will start to fade.

This is an important point in recognising early-stage dementia. When a person frequently forgets recent events and information, but can still recall in detail events from years back, this could signal dementia. A visit to the doctor for a check-up is recommended.

2. How do we know if we have dementia-related memory loss?

Firstly, we need to differentiate between memory loss and forgetfulness. Is it memory loss when we forget to turn off the lights, leave the stove on, or cannot recall a phone number? From a psychiatric perspective, this needs to be assessed with the person’s baseline in mind, and whether it affects their daily life. There are formal as well as informal tests to evaluate this. You can speak to your GP for a memory assessment if you suspect you or your loved one have memory loss.

If it is indeed memory loss, the second question is whether it is related to dementia. There is a battery of clinical tests to evaluate whether the memory impairment is significant and to determine whether the cause is dementia. These tests include blood tests, neurological tests, brain imaging scans, etc. Consult your GP or family doctor first to find out which tests are suitable for you.

3. How do brain imaging tests help to diagnose dementia?

Brain imaging tests have been used to investigate various neurological disorders such as dementia, Parkinson’s disease, epilepsy, etc since the 1980s. In particular, 2 types of PET scans using FDG (a type of glucose) and beta amyloid (a hallmark of Alzheimer’s disease) tracers are in routine clinical use to assess dementia in Singapore. They are an important diagnostic tool for dementia, due to the often lack of obvious signs and symptoms of the disease, especially in early stages.

Let’s talk about PET scan using FDG tracer first. FDG (fluorodeoxyglucose) is a type of sugar. We have not encountered the case of a patient being allergic to sugar at present. For the amyloid tracer, the risk of allergic reaction is also very low. Incidental reports are not encountered in Singapore.

To better understand the procedure, here is how it goes. After the sugar tracer is injected into the patient’s arm, the patient lies down and rests for 20 to 40 minutes depending on the type of tracer. Then the patient goes for the scan which takes roughly 10 minutes. There is no need to fast before the procedure. So if you have the PET scan in the morning, you can have breakfast as usual.

4. Since the PET scan has clear advantages in dementia diagnosis, should I just go for the scan? If I do that, can I know if I have dementia?

Dementia diagnosis process involves checking for possible illnesses responsible for the symptoms. No single test, including a PET scan, can confirm whether someone has dementia. When you go for the PET scan, you will also be asked to go through a memory assessment and other tests. The scan results are interpreted in conjunction with the patient’s history and test results.

For context to these questions and a better understanding about PET scan and its usage in diagnosing and managing dementia, watch the full dementia talk by Nuclear Physician Dr Andrew Tan here.

5. Do the PET scans to diagnose dementia need to be repeated as time goes by? If scan results are normal today, how often do you need to repeat it?

The beta-amyloid imaging scan can have lasting significance, because it can pick up amyloid deposits 10 to 20 years before the onset of dementia. So if you have a clear amyloid scan today, there is no real need to repeat it next year, or perhaps in five years’ time.

For the FDG PET scan, it depends on individual cases. For instance, the patient has vague symptoms, but we see very unusual patterns on the scan. However, we are unable to come to a specific diagnosis. In such cases, we may recommend repeating the scan in one year. This is because the one-year interval will allow us to see what distinct changes happen, which can point towards a diagnosis. In another case, the patient also has vague clinical symptoms, and the FDG PET scan is essentially normal. There is no real need to repeat it in one year’s time.

6. Is Alzheimer’s disease related to dementia?

Dementia is a big category of conditions, medically known as ‘neurodegenerative disease’. An example of a category of disease we are more familiar with is cancer. It is not just a single condition. We have different types of cancer, such as lung cancer, liver cancer, brain cancer, skin cancer.

Similarly, we have different types of dementia, with Alzheimer’s disease being the most common. 70% of people who have dementia have Alzheimer’s disease. It is first described as brain shrinkage and other characteristics that distinguish Alzheimer’s from other degenerative brain diseases in the early 1900s.

My sister asks repeated questions. Is this the onset of dementia, or just forgetfulness? At what point does she need to be evaluated?

Behaviours that indicate dementia need to be a change from the person’s baseline. The same symptom may signal dementia in some people and not others, depending on whether it is a change from past behaviours. If your sister asks the same questions repeatedly, but has always been doing that, from a psychiatric point of view, I suspect she may be anxious. Something makes her keep wanting to ask the questions. However, if this is a newly developed behaviour, and she did not have this problem and was not anxious before, then I would suggest a screening for dementia.

To determine whether it is the onset of dementia, assessment of the person’s cognitive functions and other diagnostic tests need to be done after the initial screening. Diagnosis results will indicate whether dementia is mild, moderate or severe, depending on the person’s functions.

Broadly speaking, if the person is totally independent and is able to look after their basic activities of daily living (ADLs) themselves, feeding, washing, dressing, changing, toileting, walking, it is usually a mild case. When they start needing help for ADLs, which is not due to a physical weakness or problem, dementia is probably at the moderate stage. Finally, when all of the ADLs need to be helped, we are most likely to be talking about advanced or severe stages.

8. Is 55 years old an early age to have dementia? How is early dementia treated?

My neighbour is 55 years old and diagnosed with dementia. Is it an early age to have dementia? How is early dementia treated?

55 years old is an early age to develop dementia. It is known as Young Onset Dementia (YOD), defined as the onset of dementia before the age of 65. YOD is unfortunately on the rise in Singapore in recent years. Globally, it makes up 5-6% of all dementia diagnoses.

The general approach to manage young onset dementia is delaying the condition’s progress, developing strategies to cope with it and minimise its impact. In terms of treatment and cure, there is no magical pill at this point of time but experts are hopeful that a cure can be found and made available at an affordable cost to everyone affected soon.

However, YOD has been found to exhibit different patterns from late onset dementia, such as its progression speed and the affected cognitive functions. Therefore, the management of YOD is not the same as with late onset. People who are diagnosed with YOD are often still in your prime working years. They may also have young children. Dementia changes their career and family life drastically. So their need for emotional, social and family support is going to be different from the case of a retired elderly afflicted with dementia.

9. What is the prognosis after a person is diagnosed with dementia?

I have seen a person with dementia surviving for more than 5 years and another just 2 years, why so?

In general people do not pass away from dementia. They pass away due to the problems associated with dementia, e.g., lack of care, physical health deterioration,

and so on. To answer the question why two years or five years, a total assessment of the patient’s health condition can better reveal the cause.

10. What can we do to delay or prevent dementia?

Early detection is critical in delaying the progress of dementia. Consult your doctor if dementia screening is necessary for you. Lifestyle habits play a big role as well. Research has shown that adherence to a healthy Mediterranean style diet is associated with less decline in cognitive function and slower rate of amyloid accumulation. Physical exercise is also linked to lower levels of amyloid buildup. (More from Dr Andrew Tan’s talk here.)

The most important thing in lifestyle changes is that it is all now, if you haven’t started yet. If we wait till the signs show up to start working out and improving our diet, the amyloids are already there and the brain reserve left is less. What we can do at that point is a bit like firefighting for a house already on fire. As much as we want to deal with this when it comes, as doctors, we want to also educate the public to start lifestyle changes earlier. 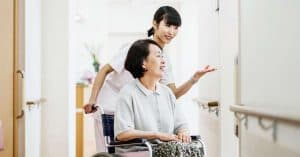 Caring for your Dementia Loved One: Tips from Professional Nurses

Nutrition for Dementia Patients: How to Keep Your Loved Ones Nourished